The zen of online gaming: Nightfall, crossdressing, and genderbendering 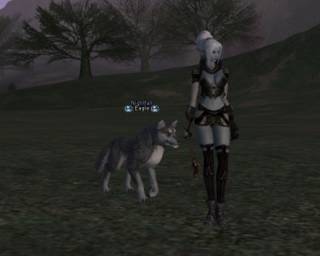 My favorite Lineage II character and her pet wolf.
Posted by Hello

This is Nightfall. She is currently my favorite Lineage II character. Nightfall is a level 18 Dark Elf Mystic, her pet wolf is called Eagle. When I play Nightfall, I often fall into a fairly feminine style of gameplay. I suppose she is one incarnation of my female id; or, for the more mystical among you, the feminine side of my genderless soul.

Nightfall appeals to me for many reasons. Just for starters, thanks to the superb artists at NC Soft, she is beautiful to look at. Equally as important is the simple fact that set amidst the stunning scenery of this awe-inspiring game, she looks completely natural. Nightfall belongs in her world to an extent that will never be true of I and the world I live in.

This world, the one where you and I work and play, is the problem. I am a man, a very heterosexual man. Despite being raped by an uncle when I was five, I have never desired to be physically intimate with another man. Perhaps the molestation is the reason? I'll leave that question to the Freudians among you. However, I love playing Nightfall, a very womanly woman. This poses a problem. For many players, their character is not really a character at all, it is an avatar, a manifestation of their own self in the gameworld. Most non-gamers also find this approach very natural and understandable. As a result, players like myself are accused of being deceptive on some level, as if we were seeking to trick "normal" players into feeling sexually attracted to us.

Perhaps, in some cases, this is true. In my case, it is not, and I am quick to dissuade any player who approaches Nightfall in a romantic or sexual manner. I tell them point blank that the real person behind the character is a man, a heterosexual man with no interest in cybersex experimentation within the context of the game. For most players, there is a moment of surprise, then they move into a semi-detached style of gameplay, treating Nightfall herself as a person and forgetting or ignoring the reality of the person behind her. For myself, this kind of moderately detached semi-roleplaying, where the characters are independent of the people behind them and yet still not strictly being regarded as actors in a fantasy world, is the most comfortable style of gameplay.

All of Nightfall's friends approach the game in a similar state of semi-detachment, realizing that although they control their characters, the characters are neither direct representations of their native personality, nor completely independent persons fulfilling a predetermined role in a highly stylized fantasy setting. Within the game we are friends, in the real world we will probably never meet and all of us are comfortable with that.

Did you notice the most important aspect of this kind of gameplay? Without intending to, my friends and I are redefining community and the dynamics of personal relationships. Perhaps, in the real world, most "normal" people are able to live their lives in a similar kind of roleplaying, but for people like me, this is impossible. The real world is too real, too immediate, too painful, and too emotionally charged. I and people like me cannot treat those we meet in day to day life as if they were acting out some kind of semi-detached role seperate from their "real" selves. The view you present me is the view I expect to be real because I am right there in the world and I cannot separate the "real" me. The me you see, is me, 100%, all the time. When I was young, we called this "sincerity". Nowadays people call it neurotic.

Online gaming gives sincere people the opportunity to distance themselves from a relationship while still allowing them the intimacy they need. Other "normal" people, consider this online detachment a reflection of mental illness. They call us "genderbenders", or "crossdressers", and accuse us of being everything from hopelessly neurotic to despicably evil. The same people who accuse me of being deceptive think nothing of lying to me about their plans, cheating me at work and in business, ignoring or forgetting social engagements, and otherwise behaving in ways designed to advance themselves while destroying me all in the name of "fairplay" in our Darwinian modern world of fast talk, fast deals, and "always look out for number one" hypercompetition.