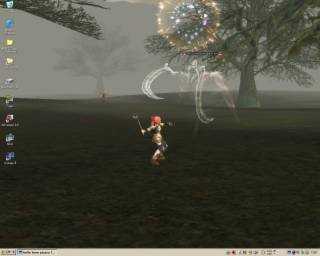 Fireworks for Halloween!
Posted by Hello

Meet Mr. Lesser Dark Horror, the scourge of the swamp in Dark Elf Country in the land of Aden. Lesser Dark Horrors, and their older cousins, Dark Horrors, are extremely powerful for their level, do alot of damage, and are very hard to kill. Dark Elf Fighters can take them one on one at about level 15, with lots of rest in between to recover their HP (life points). Dark Elf Mystics avoid them altogether until level 16 or 17, and even then they spend more time running than fighting (called "kiting": hit the monster with a spell, run like the dickens in the opposite direction while the spell recharges, then hit it again.). To my great surprise, Giantina took on two of them at once at level 13 with almost no difficulty! I am beginning to think that maybe dwarves are far more versatile than most players imagine.

Of course, Giantina has the advantage of not being my first character. All of her armor and equipment is the best that money can buy at her level, because I stipped Nightfall in order to equip her. This gives her strong advantages over "normal" level 13 characters, even the speedy and deadly Dark Elves. As a matter of fact, a Dark Elf Fighter tried to kill Giantina this morning. At first, I ran as fast as her little legs could carry her in the other direction, but the Dark Elf was rapidly gaining ground. Since it had to lead to a fight eventually anyway, I spun the character and attacked head on.

The Dark Elf died in three or four blows. I don't know who was more shocked, my erstwhile attacker or me! It was a very enlightening moment for both of us.

I just love this game!
Posted by Brian K Miller at 7/05/2004 11:54:00 PM
Email ThisBlogThis!Share to TwitterShare to FacebookShare to Pinterest
Labels: games 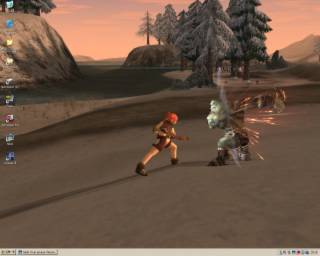 Giantina on the attack!
Posted by Hello

Giantina is a dwarf. The female dwarves have the smallest characters in all of Lineage II, so naturally I had to give her an appropriately "giant-sized" name! The dwarves are one of the hardest characters to play because they have no special fighting skills. On the other hand, they are the only characters able to create items, and they are very tough. As a result, they are extremely important to the economy of the world of Aden, and highly valued members of any clan. On the downside, they tend to be ignored until somebody needs something made. One player observed, "some days I feel more like a parts factory than a valued member of the team."

I have in the past attempted dwarves, but always gave up. They are extremely difficult to play at lower levels. However, with the introduction of Chronicle One, all characters gained a pair of interesting emotes: "laugh" and "socialwaitinga". I tried a male dwarf first, and the laugh was a great, deep, belly shaking rumble, but the social waiting was merely some boring arm stretching. So I tried a female dwarf. The laugh turned out to be an insanely charming girlish giggle of pure merriment and the social waiting was a backflip that shifts into a handstand with a trillish, "la-de-la-de-la" that makes me chuckle every single time I hear it.

I kept the female dwarf and deleted the male. Every time I play Giantina I feel like a proud Grandfather showing off the light of his life. She is just so darned cute!

A infusion of capital from Nightfall bought Giantina some new armor and a decent mace, but I haven't taken a screenshot yet.

I just love this game!

I found an interesting review of Lineage II at AVault. This is the most balanced of all the online reviews I have read to date. It covers all the reasons I love the game, and also goes into great detail on the downside (which I mostly ignore).
Posted by Brian K Miller at 7/02/2004 10:22:00 AM
Email ThisBlogThis!Share to TwitterShare to FacebookShare to Pinterest
Labels: games
Newer Posts Older Posts Home
Subscribe to: Posts (Atom)