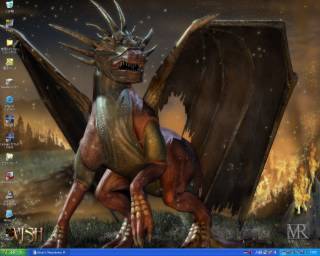 Dragons on the loose! Posted by Hello!

It is a sad fact of life in our world that everything changes, sometimes unexpectedly. A month ago I honestly believed that nothing could change my love of Lineage II nor alter my ongoing addiction to this wonderful game. I started a new character and set out to throw myself completely into the fantasy by recording my characters adventures in a story. I even broke out my seldom used credit card and paid up a full one-year subscription.

Then NC Soft NA changed their policies and decided to implement a Korean anti-hacking program known as "GameGuard". If you want the link, you can look it up yourself because as it stands now, I will do nothing to support this program. It does not work. In fact, it makes the job of certain kinds of hackers and cheaters even easier becuase it encourages the gaming companies not to implement their own anti-hack/anti-cheating routines and instead places identical controls on every game it "protects", which in turn means that once they figure out a way around it, they have instant access to every game that depends on it. There are already hundreds of way to break GameGuard floating around on hacker newsgroups and they come up with new ones as rapidly as GameGuard comes up with counters. In that particular race, the hackers are winning by a long shot.

Worse, GameGuard masks the L2.exe process (the game client as it appears in the computer's memory) from the Windows Task Manager Process List, which in turn means that if the client freezes or crashes there is no way to terminate lost routines remaining in memory. The only way to clear out the memory is to boot your computer, and if the client has completely frozen Windows (which happens quite frequently), then you must turn off the power and turn it back on again. This is known as "hardbooting" and if done repeatedly will overheat your system leading to a cracked mother board, fused I/O switch, shorted internal circuits in the CPU, and a whole host of other problems. In other words, physical damage to your computer hardware, and all because of a "security" program that doesn't even work!

However, just as all hope appeared lost, someone mentioned Wish, a brand-new game with a brand-new concept and a return to the idea that a fantasy world adventure should be analogous to living in a fairytale rather than endlessly leveling up a character.

This begs the question of what I will do with "Of Darkness and Dust". Well, after careful consideration the answer is: I don't know. I am considering putting an original online novel there. The writing bug is still begging for attention, and this way I could accomplish multiple tasks at one time. I could go back to serious writing, I could have an online forum for my fiction, and I would have an important reason to focus on one tale at a time. On the other hand, it could also become a place for book reviews (I read too much!), or, if nothing else, an honest-to-goodness online journal rather than the hodge-podge of chaos you are reading now. So, we'll see. Either way, it will have a single focus while my random insanity will remain here. That much I am certain of. The only question that remains is what that focus will be.

Give me a couple weeks and I'll come up with something.

Today I was going back through my game posts and I found this one, complete with dead links and lost dreams. The good news is there is finally a new kid on the block who has the potential to not only bring back much of the magic of Wish, but expand on it in ways the Mutable Realms team never dreamed would be possible. This new game is called Project Gorgon and at the moment is in open testing for anyone who would like to sign up and sign on. Project Gorgon is in very early Alpha testing, which means although the map is complete and there are working NPCs who offer a number of quests sometimes the NPCs have no legs, no heads, or no arms as the various display layers get jumbled. Fortunately, I have yet to discover any invisible enemies such as those which plagued Lineage II for almost two full years following its commercial release. The existing systems in Project Gorgon work, although content is extremely scattered. With a few more months of programming they are certain to have a solid foundation to continue building far into the future.