Who's afraid of the big, bad wolf? 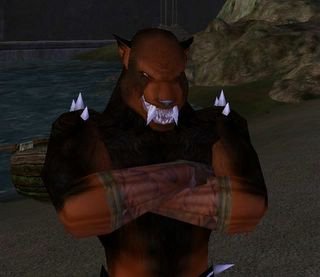 Who's afraid of the big, bad wolf?
Posted by Picasa

Life as a villain is sweet! City of Villains is now live and man is it fun! Ever since reading the Marvel comic "Werewolf by Night" when I was a kid I've wanted to be a werewolf and now I can. Not only do I have fangs and claws and a mean streak, I can throw fireballs like there's no tomorrow, rob banks, beat up on both good guys and bad guys, and generally raise havoc. Virtual reality is a wonderful thing!

Is there anyone left who does not believe that the VR world we all envisioned a decade ago is now a reality? Okay, maybe we don't have neuro-implants, body suits, and that kinda stuff, but MMORPG style games such as Lineage II and City of Heroes have now made it possible to log in, create a fantasy character all your own, and live out that character's life in a way so compelling that most people intuitively identify directly with their character. When they talk about their online presence they don't say, "my avatar is an elf", they think and readily affirm, "I'm an elf".

Virtual reality is no longer science fiction. It is now real, and has been for the past couple of years.

Do yourself a favor, go play a game!

Five thousand years before the birth of Christ, humanity built what is quite possibly its very first city, Uruk. Uruk was dominated by two imposing temples that had already been rebuilt at least three times, with the originals being constructed somewhere around 7,000 B.C.E. These two temples are key points in Sumerian religion and they appear in every single city, town, or village the Sumerians, and the later Akkadians, were to build in the fertile lands of Mesopotamia.

One temple was dedicated to An, who later became, Anu. An was the Sumerian Sky-God, and quite possibly represents the very first personification of a natural element. An/Anu came long before the Egyptian Ra, and might even have inspired him. In Nippur, Anu's temple stood second only to Ishtar's in terms of size, and apparently in terms of popularity. Although there can never be any direct evidential links, I personally am of the strong belief that Abraham, the father of both the Jewish and Arabic peoples, left Uruk (which is labeled "Ur" in the bible) as a result of the economic and political decline in the Akkadian period (circa 2200 B.C.E.). I am also strongly of the opinion that the core components of Judaism (and thus Christianity and Islam) are in fact identical to the religion of An as it was practiced in Sumer and that Abraham himself was a follower of An. In other words, horror of horrors, regardless of whether you call him Yahweh, Jehovah, Allah, or just "God the Father", the deity worshiped today by over half the world's population is nothing more than the modern version of the Sumerian An whose first temple was built over 9,000 years ago.

The more things change, the more they stay the same.

The worship of An, including modern religions like Christianity and Islam, is the quest to avoid dying. An is the religion of fear, the fear of death, the fear of loss, the fear of shame, the fear of damnation, the fear of every evil that life can bring all landing on your doorstep at the same time. Since no human can ever carry this burden, we call upon God to carry it for us and to protect us against the chaos that life can bring, especially the destructive chaos. The only counter to chaos is order. Complete, total, all-consuming organization and constant vigilance so that when chaos descends, we can limit its destructive potential.

We never do learn though. Hurricane Katrina, the earthquake in Pakistan, the tsunami in the Indian Ocean, all demonstrate clearly our powerlessness. Ineptitude, negligence, and incompetence always increase the already horrendous damage that life throws at us with alarming regularity. To worship An is to learn from these failures and to seek to be less human and more godlike in our preparation and readiness for the next time they strike.

The worship of Ishtar is just the opposite. To worship Ishtar is to live for this moment in time because this moment is the only one we have! Eros, with those we love, with prostitutes and gigolos, or with a pornographic web page and our own self, is an entirely different approach. To seek love, especially erotic love, is to seek carnal pleasure in defiance of the chaos of life. To accept the fact that one day we all must die, that life after death is a meaningless concept and to therefore maximize the enjoyment of this life because this life is the only one we have, is to pursue the worship of Ishtar and her many variants even when we fail to recognize it.

Starting with humanity's very first city, the tension between those who live to love and those who live to work has been an ongoing source of social stigma, vicious infighting, and sometimes, wholesale slaughter. There are two approaches to life, the serious and the seriously fun, and each of us individually must choose which direction our life with take. Neither is completely right, neither is completely wrong. The only way any of us can be happy is for each of us individually to find the balance between the two that works best for us personally and then to recognize without malice that no one else alive is required to accept the exact same balance.

XXXChurch.com is entering into a battle that has waged for at least seven thousand years of recorded history. It is a war that cannot be won and cannot be lost. It is a war of opposites that points to the excesses of the opposing camp while denying their own. True, the pornographic industry has ruined many lives, and continues to ruin lives to this very day, but Christianity and its extreme intolerance is directly responsible for the ongoing conflict in the Middle East, the horror of 9/11, the myriad failures that made Katrina so much worse than it needed to be, and continuing presence of American troops in Iraq and Afghanistan.

Christianity is the driving force behind America's hegemonic version of commercial imperialism, an imperialism as demonic as any of its many historical predecessors in the way it destroys cultures and societies with no regard for the values and priorities of their people. Pornography is rampant in America because it represents one avenue of stress relief for those who by all rights belong in a church dedicated to the worship of Ishtar and the real-world recognition that we cannot all be the same and we cannot expect other people to appreciate or respect our personal values and priorities.

The crusade of XXXChurch.com will fail. Despite any short-term or limited victories it achieves it will ultimately fail to "win" the war against pornography because what it is really fighting against is the need so many of us have to enjoy life while we can, when we can, and where we can. Eros is here to stay. The churches of America need to focus their energies on things they can more directly address and needs they can more successfully meet. Issues like homelessness, poverty, or inequalities in education and opportunity, are all far more important issues that no church in America ever takes it upon itself to address, and never will. They can't, because if they did, they might actually have to sacrifice the comfort of being righteous.

Like it or not, sex is just as important as history and, in some cases, creates it.

I am strongly tempted to go through this post and remove several paragraphs. I honestly don't know what I was thinking when I wrote them. Perhaps I was still angry over the boondoggle that Hurricane Katrina turned into and I was looking for someone to blame. Perhaps I was still clinging to the naivete of youth. In my own defense, at the time my real world concerns were still focused on my teenage sons, helping my wife get our company off the ground, and escaping into game worlds as a way of avoiding the nightmare that life in Tokyo had become. Although I was in the midst of my transformation from liberal progressive into staunch conservative, it would still be another year or so before I had the time to do any genuine research.

At the time, the thought I was reaching for and failing to grasp hold of was the dichotomy of collectivism/individualism. Although I did not even realize it at the time, I was still viewing the world through glasses colored by collectivist thinking picked up from Japanese society, certain professors at Sophia University, and CNNj as my primary news source. I could see the contrast between order and chaos, and I could see that "chaos" was sometimes nihilistic while "order" was often nothing more than forced conformity. Instead of viewing worshipers of An and Inanna as individuals making individual choices for their own reasons, I was still thinking of them as two opposing homogeneous groups. Naturally, the same flawed thinking colored my understanding of the goals of both XXXChurch.com and the online pornographers. Were I to sit down and write this post today I would still arrive at the same conclusion, but the internal logic would be completely different.

Perhaps, rather than condemning my earlier thought processes I should be pleased my instincts were good enough to bring me to the same real-world conclusion as I would arrive at today. The church in modern America remains a morass of hypocrisy, condescension, and self-righteous chest-thumping, sometimes seeming more interested in destroying those who disagree with it than in serving those who need it most. Most of the people who understand that the role of the church in this world is the role of service have fled the organized traditional churches and the pie-in-the-sky megachurches for the openness and honesty of home churches where the experience of each individual is welcomed and appreciated. (For more information on this issue please see "The Global House Church Movement" by Rad Zdero, or "Reimagining Church: Pursuing the Dream of Organic Christianity" by Frank Viola)