Have Cape, Will Fly! 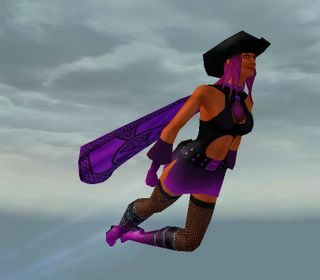 Have Cape, Will Fly 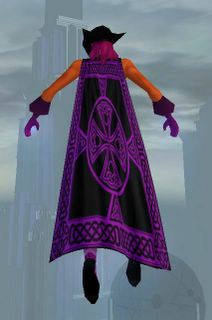 One of the most interesting aspects of the CoV/CoH MMORPG is the ability to fly. Although a hero or villain can gain flying by level 14, it is not until level 20 that they earn the right to wear a cape. I don't know about heroes, but in order for villains to earn this right they have to do a special mission that takes them into an empty instance of Atlas Park where they desecrate a hero's statue and defeat a hero. Once they take the fallen hero's cape back to Kalinda, capes appear in the options available at the tailor.

So off Empress Dusty Enalios went in search of her quarry. The streets of Atlas Park were devoid of their normal pedestrians and vehicles. There was nothing in sight but clusters of Longbow patrolling for bad guys to stomp on. When the instance opened and I looked out on the scene my first thought was, "I might be a villain, but after this the people of Paragon should thank me! The place has turned into a police state!"

The first thing I did was fly around the edges and see how much of Atlas Park was actually available to me. Turns out it was about a third, although I will admit, I'd have to go back into CoH and zip around in Atlas Park itself to confirm that.

The groups of Longbow were spaced far enough apart that taking out one group would not draw the attention of the next. Since I soloed the mission, this was a good thing. It took less time than I thought it would to find the statue I was supposed to destroy. Once that was done, I got ambushed by a trio of Longbow led by a Ranger. When they were mopped up, another ambush came in. This time a Longbow Commander and two Captains. That was tough, and in all honesty, they almost had me. It took two rounds of summoned robots, and the battle lasted long enough to summon Triage Beacon twice, which has a 90-second recharge timer.

While I was still licking my wounds and wondering how much harder the Hero would be, she showed up! A hero NPC named Ms. Shock and a single Longbow Rifleman in support. Ms. Shock didn't do much damage with her electric attacks, but she was quite tough and didn't take damage easily. After the Longbow Commander and Captain battle, though, this one seemed almost anti-climatic. Not that it was easy! Her high toughness made her very hard to kill and it took quite awhile, but I was able to get by on my existing robots and I never felt compelled to drop another Triage Beacon.

Back to Kalinda I went, then straight to the tailor to pick out my new cape. The design is called "Celtic" and the editor allowed me to set the design, the length, and the style, as well as the colors for both the inner and outer surfaces.

Dusty Enalios looks quite regal now, I think. Although if Andromeda Redux continues to grow and she becomes a bonafide empress I will have to see about getting her a new costume. The pirate garb is sexy, but hardly elegant.

Master of her own universe 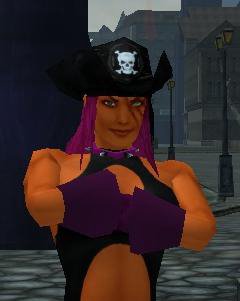 Master of her own universe
Posted by Picasa

Not satisfied with a werewolf alone, I decided to add a Mastermind to my collection of CoV villains. The Mastermind class has the ability to call up minions to do their evil bidding. In Dusty Enalios' case, that means robots. Well, robots are hardly magical, now are they? So I gave her a Technology origin and a Traps secondary. This also allowed her personal damage-dealing potential to be a Pulse Rifle. As long as I was building a nice little SF-style character I figured I might as well go all out and make her really extreme, so I made her a Space Pirate!

At first it was just supposed to be a humorous, satiric response to all the serious Mastermind characters that look like martial arts experts (Ninja minions), military leaders (mercenary minions), and walking undead (zombie minions). It turned out she was really fun to play. So, today, I made a Supergroup, just for the heck of it, right? And I started advertising for roleplay people who might be interested in belonging to a group of SF-style characters. To my own surprise, people actually responded. Since it now looks like Dusty Enalios is going to be my main character, I've gone ahead and written up a bio for her.

It's supposed to read like a criminal dossier, without all the boring physical details like height and weight. Just for the heck of it, I've included it below.

Dusty Enalios discovered science fiction at the age of nine. From that time on, her imaginary world was dominated by the works of Isaac Asimov, Robert Heinlein, Ray Bradbury, Arthur C. Clarke, Kathleen Ann Goonan, and countless others. At the age of eleven, she stole an electric motor from a neighbor's radio controlled model car as well as an erector set from a different neighbor. She combined the two into a robot and named it, "Daniel Oliveer". When her theft was discovered, she denied everything claiming instead, "the Empress Enalios does not steal, she commandeers."

Her parents were not amused.

Although nothing else could be ascribed to her directly, small items of electronic or technological significance continued to disappear whenever she was around. No one was quite certain where she hid the items she took, so they could never prove she had stolen them. When confronted, she would deny any knowledge of the items, let alone their removal from their proper places.

As Dusty Enalios retreated further and further into her fantasy universe, she began dressing in clothing that bore a strong resemblance to the items worn in various science fiction programs or movies. Many of these things she made herself, without ever once asking her parents for the materials to construct them. Her parents assumed she was stealing the cloth, thread, needles, pins, and other materials, but no one came forward to accuse her and by this time they had given up confronting her directly.

At the age of sixteen Dusty Enalios and an accomplice were caught in the midst of breaking into a Science/Technology Hero Supply in Atlas Park. It appears they were attempting to procure the items necessary to construct a neural network of high-end computers. The hero who caught them used far more force than necessary, killing her accomplice and leaving her face badly scarred. As a result, she can easily be recognized by the three long scars starting from her forehead, stretching across her left eye, and ending half way down her left cheek. The left eye is white, milky, and believed to be blind.

Dusty Enalios was first imprisoned in a low security youth correctional facility in Galaxy City. She hotwired the security and slipped out without being detected. Another hero picked her up at the entrance to Perez Park. When questioned, she insisted her Empire was across the wall and beyond the security zone. Without the slightest trace of falsification or fabrication, she insisted that imprisoning her endangered another interstellar war only this time the invaders would be far more powerful than the Rikti.

Fearing there was no other facility secure enough to hold her, the authorities confined her to Ziggursky Penitentiary, where she remained for the next eight years. Although it is not certain how it happened, she disappeared during the daring prison break sponsored by the self-styled Lord Recluse of the Rogue Islands. There is some indication she was able to break into a secured weapon locker during her escape and gained possession of an advanced Pulse Rifle.

Anyone who encounters this villain should remember that she is highly delusional, devoid of all emotion, and will kill or maim anyone who confronts her. The most recent intelligence available indicates she is in the process of building a robotic army of immense proportions and may even be actively recruiting other similarly deluded people to join her cause. Standard law enforcement officers should avoid her at all costs. The Freedom Corps has been fully entrusted with her eventual arrest and reincarceration. All other agencies are encouraged to maintain a hands off approach to this dangerous and highly deluded individual.

What can I say? I am really enjoying this game!