Back in 2005 I wrote a post called, "The Prophecy Game". If you go back and read that post you'll see quite clearly that I am very bad at prophecy. Despite this undeniable truth, sometimes I find the temptation to predict the future too compelling to resist!

The "Malala" in the title is, of course, Malala Yousafzai, who recently won a Nobel Peace Prize. Within hours of the announcement one branch of the Pakistani Taliban sent six fighters into a school for the children of Pakistani soldiers. The terrorists slaughtered 141 people, most of whom were children. The day after this massacre someone set off two bombs at a Pakistani girl's university in a city further south. This has been a bloody week for education in Pakistan. At least one writer believes this latest round of violence is intended as revenge for Malala's Nobel Prize. Malala herself has come out with a statement expressing heartbreak at the loss of so many young lives.

"Maitreya" is a term drawn from Buddhism that has surprisingly similar words in Arabic, Hebrew, and Aramaic. "Maitreya" is the next Buddha; or more precisely, the next incarnation of the Buddha Mind. The Maitreya is a future Buddha who arrives in the midst of chaos to teach the world once again the lessons of peace, order, and love. Naturally the Maitreya has many similarities to future messianic personalities in other religions, including of course the deceptive compassion of the Christian Anti-Christ. The Maitreya, however, has one very distinct difference from all of the other messianic figures in the world: the Maitreya can be a woman!

Our world is in the midst of a very violent transition and Islamic terrorism is at the very heart of it. Modern Islamic terrorism is driven in large part by ancient collectivist dreams of a theocratic utopia that can only be realized by abandoning modern technology, sacrificing individual freedoms for the sake of the common good, and giving up the widespread increase in personal luxury that has homeless people in many countries enjoying better lifestyles than royalty of a mere two centuries ago. There is a huge gap between the richest countries in the world, the poorest people in those countries, the richest people in poor countries, and the most impoverished of all who are still living on the brink of starvation. Fortunately, the percentage of our world living on the brink of starvation is lower now than it has been at any time in recorded history. Part of what drives radicalism of all stripes, and Islamic radicalism in particular, is that many poor people find themselves with food to eat and a place to live but not much else. Jealousy and guilt are both major factors leading young people in western countries to jump on airplanes and fly off to join groups like the Taliban or ISIS. (Jealousy over the disparity in quality of life experienced by the working poor in places like the Philippines versus places like the United States is often coupled with feelings of guilt over living in the richer place while your relatives live in a much poorer one. The combination of the two can be emotionally devastating.) Things are improving all over the world, but in many places the pace of improvement has left people with time on their hands and jealousy in their hearts. All of this is pretty standard fare of any transitional phase down through the pages of human history.

Which is why our world is ripe for a populist leader to come along who embodies compassion for the poor, the resources of the wealthy, and a genuine desire to eliminate poverty once and for all. This is the same promise made by communist revolutionaries a century ago, modern progressive politicians, and religious icons like Joel Osteen or the Dalai Lama. It is an extremely tantalizing promise, especially when offered up in the midst of a violent transitional period like the one we are currently experiencing. Malala Yousafzai was first given a voice by the BBC. In an effort to discredit the Pakistani Taliban they hosted a blog for her under an anonymous name where she regularly posted about the hardship of life under the Taliban for a young woman seeking an education. Unfortunately for Malala, her identity was revealed and the Taliban responded by attempting to assassinate her on the bus ride home from school. This propelled her onto the world stage in ways no one could have foreseen and now she has won a Nobel Prize. As if some giant puppet master is controlling our world, her first public statement after her acceptance speech is heartbreak over a terrorist strike on a school. She now has greater popularity than Princess Diana ever enjoyed and more political clout than Hilary Clinton could ever hope of gaining. Even better, the Dalai Lama recently announced that he hopes no one replaces him. This last bit is critical. The Dalai Lama is far more than a political leader. He is viewed by Buddhists around the world as the incarnation of the Buddha Mind. If he were to propose that his title become symbolic and be awarded to Malala Yousafzai, it would unite under one charismatic leader well over two-thirds of the world's population. After that, all it would take is for someone to recommend she be appointed Secretary-General of the United Nations and suddenly she would have both the clout and the resources to change the world.

As I said above, I am a terrible prophet. Still, it would not surprise me if by 2016 the President of the United States has become politically irrelevant. Barack Obama has destroyed so much of our global prestige that it would take very little for a group of powerful kingmakers to replace him with someone who would gladly had over the reins of power to a charismatic world leader. If Malala Yousafzai can be given a title to match her popularity and prestige then she would become the natural choice for a charismatic world leader able to unify much of the world under a hybridized religious/political hierarchy. Over the next eighteen months I expect to see much more of her in the daily news. If not 2016, then surely by 2020 (barring some miracle) American prestige on the global political stage will have declined enough to have people all over the world (even in America herself) clamoring for someone with demonstrated compassion and courage to take the reins of world power and lead us into a golden future. Do not be surprised if Malala Yousafzai is offered up as that leader. "Maitreya" would be the perfect title for someone being asked to hold the reins of power both politically and spiritually in a world filled with fear and uncertainty.

I can already see the headlines, "Malala Maitreya Proposes New World Order Based on Education, Peace, and Prosperity for All!"

Radicalism helps no one


I logged onto Facebook today for the first time in about 48 hours. High up in my newsfeed I found a photo that set my blood to an absolute boil. The depth of arrogance, the extreme delusional thinking, the total lack of ethical foundation infuriated me beyond even CNN reports on the Ferguson riots themselves. How could anyone honestly believe such complete nonsense? 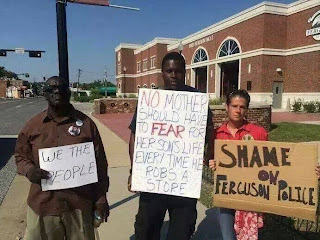 So I did what I normally do when an internet photo makes my blood boil: I went looking for the source. Using Google image search took me awhile to learn, but now it has become as routine as getting out of bed in the morning. And like getting out of bed, sometimes it goes smoothly and sometimes it brings a boatload of aches and pains. Fortunately, this time it went smoothly and in the very first search I found the original post with the original photo:

Riverfront Times: Ferguson Protesters Get Kicked Out of Protest Sites

I was even more horrified than I had been originally. There is no justification for pillaging local businesses and burning them to the ground. None whatsoever. What happened during the riots in Ferguson is a disgrace to everyone on both sides of the Darren Wilson/Micheal Brown incident. I don't care what color your skin is or how oppressed you feel. Nothing justifies burning down the businesses your community depends on. However, it is just as unethical to then corrupt the agenda of peaceful protesters in order to prove a point about the violent ones. To desecrate a genuine protest sign in order to inflame racial divisions is just as unforgivable as giving a speech demanding violent protest in response to an event that feels oppressive. Whoever edited this photo in order to anger people like me into irrational outbursts that would only serve to inflame an already explosive situation is just as morally bankrupt as those who looted local businesses and then burned them to the ground. The only possible purpose of such an edit would be an attempt to create an equally violent response. The provocateur is the equal of the animals they unleash.

Here is the original sign. I honestly believe this protester has either refused to accept the reality of what happened when Micheal Brown was shot and killed by Darren Wilson or simply not been given enough facts to make an informed judgment. Micheal Brown's death was a tragedy, but it was neither unjustified nor inexcusable. It was simply the inevitable result of a thug choosing to react in violence to questioning by a police officer. If you pick a fight with a cop you might get beaten into a coma or you might wind up dead. Either way, it was not the cop who picked the fight so it is not the cop who holds the blame. 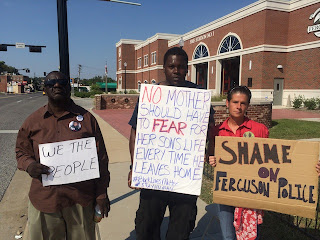 Michael Brown and Trayvon Martin both died because they failed to exercise common sense when confronted by someone questioning the motivation behind their behavior. Responding to a simple inquiry in anger and violence is a very good way to wind up dead. Don't get so angry at someone who questions you that you start throwing punches. If you do, they just might pull out a gun and shoot you. Respond with courtesy. If the situation escalates, defend yourself with whatever force is necessary to extricate yourself from the situation and no more. The secret to a long life in a violent world is to never throw the first punch while always being prepared to throw the last one.

The first law of victory is to avoid conflict completely. If conflict does not occur then no one dies. Honest negotiation and realistic compromise is the key to avoiding winding up dead or sending someone else to wind up dead in your place. You cannot lose a war that is never fought. The second law of victory is surprise. When negotiation fails, strike hard, strike fast, and use overwhelming force. This is never the first law because it contains huge risk. There is always the very real possibility you have underestimated the opposition's ability and willingness to exact extreme violence to achieve their agenda. This is where both Michael Brown and Trayvon Martin failed. They believed negotiation was not an option and they responded with violence, but both men severely underestimated their opponent and they paid for that failure with their lives. The third law of victory is knowing when to make a full tactical retreat. If you strike and only after striking discover that you have misjudged the opposition then either surrender immediately or withdraw as quickly as possible with as little damage as is realistic. By successfully withdrawing you will live to fight another day. The fourth and final law of victory is don't make the same mistakes the next time around. Learn from your mistakes. Improve your intelligence gathering. Improve your negotiation skills. Improve your ability to respond. Finally, and most important of all, never engage an enemy when you know you will lose.