2019 was the worst year of my life. I started the year on a high note: freshly divorced, money to spare, looking for investments. I invested over half of my divorce settlement in local businesses as well as in a new company for marketing my shirts and books. The local businesses collapsed. $50,000 in advertising produced ten shirt sales and one book sale. I also lost money trying to learn daytrading and failing miserably.
I went back to work. I got a job at Lowe's Home Improvement store. It nearly killed me. I lost forty pounds in five months and suffered the first back injury of my life. Fortunately, the back injury was minor and did not leave any chronic pain or damage.
A friend suggested I apply to OneEighty, a local addiction recovery organization. To my great surprise, they hired me. I am only making $12.25 per hour, which means I am falling behind on the debt payments left from my failures, but at least I am not lifting 300 pound boxes of patio furniture by myself.
I haven't been spending my little free time sleeping or binge watching television programs. I've been searching for some way to get in on the ground floor of 5G. It's coming. It's going to change everything. It's going to transform tens of thousands of people into millionaires by the end of 2020. I won't be one of them, but if I can find the right investment I will certainly be better off than I am now.
I use Robinhood for investing in stocks and ETFs. The interface has a steep learning curve, but it's simple and straightforward enough that with a day or two of study anyone can master it. If you use my referral link to join, they will give both you and I a free stock worth about $5.
Join Robinhood: https://join.robinhood.com/brianm3790
Here is my current portfolio: 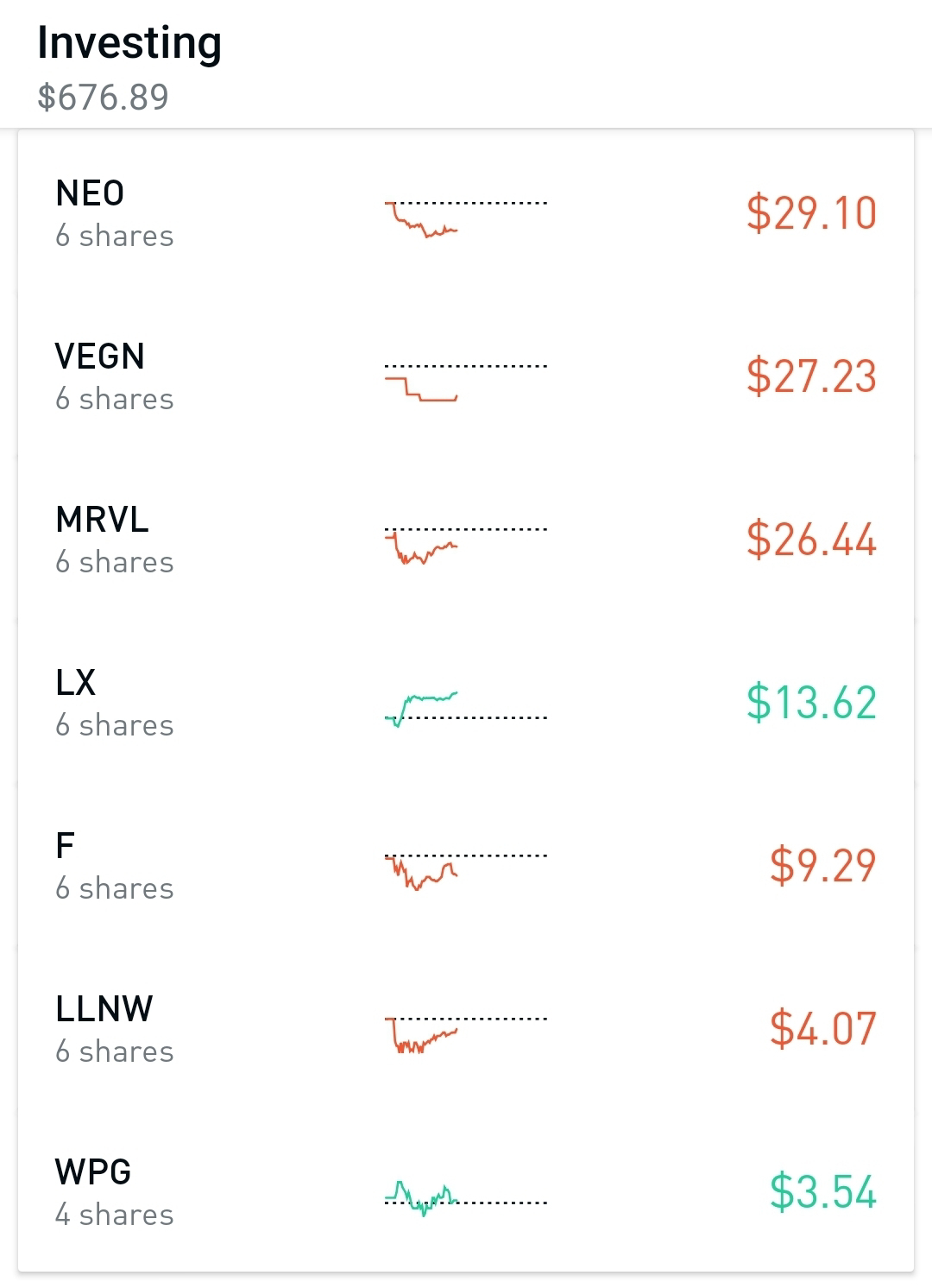 My stock selections are based on both my own research and research done by The Oxford Club, one of the oldest, most prestigious investment institutions in the world. If you can only afford $20, then join Robinhood with my referral link and buy one share of MRVL. This company holds more than 10,000 patents related to technology forming the beating heart of 5G. No one can predict the future, but MRVL is the best company I could find in a position to reap massive growth from the 2020 rollout of 5G.
LLNW would be my second recommendation. I discovered this company entirely by accident. I received one share for free after someone used my referral link to join Robinhood. LLNW is a video streaming server company specifically created to take advantage of the coming 5G rollout. By year end it could potentially become the 5G version of Netflix. Naturally, it could just as easily fail completely, but one share is cheaper than a Starbucks grande doubleshot, so it's worth the risk. The share I received for free was worth $3.43. I did some research, liked what I learned, and bought four more shares at the same price. On Friday it closed at $4.03. Apparently I am not the only one happy to learn about it.
2019 nearly killed me, physically, emotionally, and spiritually. I hope 2020 will better for both of us.
Get Robinhood, buy some stocks, let's ride the 2020 rollercoaster together and see how it goes!
Posted by Brian K Miller at 12/30/2019 02:27:00 PM
Email ThisBlogThis!Share to TwitterShare to FacebookShare to Pinterest
Labels: investing


The world around us is alive with color and sound. Often, there is too much information to absorb and our minds become overwhelmed with data. Every individual has a different tolerance level for data overload. Some individuals are only comfortable when immersed in color and noise while others prefer silence and monochrome. Others still move between immersion and stillness, sometimes favoring one, sometimes the other.

The Awaodori is a festival dance that has been practiced and performed in some parts of Japan for centuries. Zen Buddhism, one of the principle religions of Japan since at least the tenth century, places an extremely high value on silence. Buddhist monks will often take vows of silence that will last for decades. Some Buddhist monasteries prohibit all forms of sound within their compounds except for the drone of insects or the singing of birds. This dichotomy within Japanese culture is not a paradox. It arises out of the natural differences between individual humans. Neither the clamor of the Awaodori nor the stillness of a Buddhist monastery is appropriate for everyone. There is no greater value in one over the other. Differences between individuals are neither something to be celebrated nor something to be scorned. It is our differences that define us individually and allow us each to play a different role in the great drama that is life.

There is a story told in Hinduism that I am very fond of. A wise and learned Brahmin was the most valued advisor to a particular king. He served his king from the time he finished his studies of the ancient texts until the day the kind died and was replaced by the son. The son did not value the wisdom of the old Brahmin, so he sent him into retirement. As a part gift in recognition of his long service to the kingdom, the son gifted the Brahmin with a rare, beautiful, and very valuable vase. It was the only item of any worth the Brahmin had ever owned and he cherished greatly.

One night, a few years after his retirement, a thief broke into the Brahmin’s home. As he reached for the vase the old man awoke. The two stared into each other eyes for a few moments. The thief spoke first, “If you try to stop me, I will kill you. If you report me to the magistrate my sons will find you and kill you.”

“But this vase is my only treasure,” replied the Brahmin, “if you take it from me what use will I have for my life?”

“Does your life mean so little you would sacrifice it for a vase?”

“You misunderstand me. I will not try to stop you from taking the vase. I just want you to know that when you leave here you are not taking a simple vase. You are taking my heart and soul with you and I will be devastated.”

The thief looked into the watery eyes of the old Brahmin. The Brahmin looked into the desperate eyes of the thief. For a moment, each felt the other’s pain and each knew the other’s heart. Then the thief slowly backed out through the door and the old Brahmin laid back down to sleep. The thief went on to sell the vase and feed his family while that night the Brahmin died in his sleep and went on to his next life.

The first time I heard this story, I thought it was a story about accepting fate and forgiving wrongdoing. Now, decades later, I realize the story is much more complex. It plays off many of life’s dichotomies against one another without offering any additional commentary on the good or bad of each. Unlike an Aesop’s fable or a Biblical proverb, there is no overriding moral theme being presented. The purpose of the story is to remind us that we each go through life surrounding by different conditions, different situations, and under different pressures. We each make individual choices to confront or accept the challenges that life throws at us. We each play out our role in accordance with our internal reality even when that internal reality has little or no relation to the one surrounding us. Our differences neither raise up to kingship nor carry us down to thievery. King, Brahmin, and thief each play a different role in the greater drama that is life itself. The color and noise of our life shapes us, but our choices define us.

The beauty of the vase given to the Brahmin, the cacophony of Awaodori, the power of a new king, and even the desperation of a thief shapes the internal reality of everyone who reads this, even as the story and the festival shaped my understanding of the world I live in. Without these rich experiences, our internal reality can become so detached from the external one that we lose all touch with both. Insanity is the result of a schism so great between the internal world and the external world that the individual can no longer function effectively either within their own mind or within the greater world. Everything collapses and the individual either withdraws completely, lashes out violently, or takes their own life.

Color and noise connect us to the world, preserve our sanity, and shape our inner world, regardless of how much or how little we can tolerate. Even a Buddhist monastery devoted to silence must allow the droning of insects and singing of birds. These simple flashes of color and sound keep the monks grounded in the real world while their silent meditations allow them to explore their internal world.

Color and noise, the internal and the external, everything has merit at some point to some individual. The only real enemy is disdain because it prevents an individual from those new experiences which are vital to growth, maturity, and eventually, wisdom.

My Author Page at Amazon

My Shirts and Popsockets

If you're rather pick and choose which stocks you invest in, try Robinhood