A long time ago, I was one of thousands of "GOTO" beta testers who routinely received invitations to play online game while they were still under development. I could easily go into great detail about how and why hundreds of games never made it out of beta testing. I could name dates, places, and people directly responsible for grave errors in execution that doomed these games.
But I won't. Some stories are better left in the dustbin of history.
I learned today that a very famous developer died a few years ago. I was wondering why I hadn't heard from him. There is no public information about the cause of his death. I won't speculate. A part of me is sorry to see him go, another part is not surprised.
My name wound up in a database for game testers back in the early nineties. I'm not quite sure how it happened. I often went to the Tokyo Game Show where I met many important personalities in the early days of persistent world online gaming and as result, I volunteered for a couple rounds of beta-testing. Before long I was receiving invites for games I'd never encountered. I lost count of how many games I tested a very long time ago. I haven't tested any games in about a decade now.
It was quite a shock to stumble across a familiar name. I can't call him a friend, but he was someone I heard from off and on all through the time surrounding 9/11.  Two or three years both before and after that tragic event he and I would exchange the occasional email about the potential of online gaming to change the world. He was seven or eight years younger than I am. Very ambitious. Very skilled in a variety of computer programming languages. He was a master of algorithms responsible for increasing frame rates without losing animation quality. He was also arrogant, condescending, and elitist.
I fought against cyber-bullying long before the word itself was invented. I argued long and hard against it in hundreds of game forums and USENET discussions. I could not believe the majority of people involved in these wonderful new realities were sadists of such high caliber. A decade ago I basically left gaming. My favorite game was canceled. The bullies had completely overrun every other game out there. Game companies had begun catering to the petty whims of the bullies at the expense of everyone else. And so we wind up in the modern age where the most popular and profitable games are all completely designed for and controlled by the most sadistic and infantile people that ever lived.
For most of my life, I believed humans were mostly good, generous, caring people who went out of their way to help the people around them. I believed in America because I believed in Americans: the most generous and helpful nation that had ever existed on planet Earth. We rebuilt nations we defeated in war. We fed people who humiliated and abused us in international gatherings. American generosity, creativity, and persistence inspired the rest of the world to try and be better people.
Somehow, the internet age has destroyed the greatness of America. I don't understand it. The most arrogant and condescending among us have grown in popularity around the world. Cynicism, sadism, and glorification of the most evil forms of human experience have risen to the top of the heap, drowning out the basic humanity of the entire world. Much of this cruelty originates right here in the land of the free and the home of the brave. Political leaders don't even pretend to care about the people anymore. They overtly and loudly advance doctrines and policies specifically designed to increase their bank accounts while impoverishing most Americans. The CIA and other "law enforcement" agencies routinely channel illegal narcotics into the American heartland in order to fund the overthrow of nations that challenge the profitability of global corporations, many of which are owned or operated by people with deep roots in ancient aristocracies.
I don't know what the future of the world looks like. I only know this is the not the global culture I have spent my entire life working to build. I fear for the generations yet to be born. I cannot even imagine the dystopian future that awaits them.
It did not have to be this way, but here we are, and I am too old to continue fighting.
Posted by Brian K Miller at 5/17/2020 01:46:00 PM Links to this post
Email ThisBlogThis!Share to TwitterShare to FacebookShare to Pinterest
Labels: computers, conspiracy, games, general rambling, globalization, greed, history, insanity, politics, programming


As always, I am not recommending anyone purchase any particular stock. However, interest rates at banks are far below the rate of inflation. Keeping large amounts of money in your local bank causes the value to decline dramatically, even though the numbers grow ever so slowly. Therefore, I am recommending downloading Robinhood and investing in your favorite company, or perhaps companies. As a small incentive, if you use my link to download Robinhood, open an account, and deposit some money, you and I will both receive one free share of stock worth about $4. Here's my link:

Thursday morning I was in a panic. My savings were depleted. My unemployment insurance had been canceled because of comments by my previous employer. I was getting daily calls from companies I owe money. I had sent out nearly 200 resumes and received around 140 rejections, the rest had not replied at all. I was looking at my meager stock portfolio wondering if I would have to sell it off just to eat. I emptied my Coinbase account and took a long, hard look at the $200 in my Acorns account. I sat down and wrote Thursday's blog entry, "Moving Forward by Pulling Back". Despite my falling funds, I needed some groceries and cleaning supplies. I had a little money remaining on my Acorns "Spend" debit card, so I headed for Walmart.

Walmart had been completely rearranged. There were arrows on the floor controlling traffic and warning signs everywhere about social distancing. Almost everyone wore a homemade cloth mask. Customers and staff alike were rude and short-tempered. I got what I needed and got out of there as quickly as I could. Never in my life did I imagine a trip to Walmart could entail so much stress and discomfort.

I arrived back home, put away my groceries, poured a fresh cup of coffee, and sat down to check my accounts. I was very surprised to find a large deposit in my checking account. It turned out OJFS had reversed their earlier decision and settled in my favor. The deposit was four weeks of unpaid unemployment insurance, both federal and local. This was completely unexpected. I paid a couple of those bills, bringing the accounts up to date. Then I transferred 10% to my Robinhood account. One of the golden rules of investing is always pay yourself first. Technically, in this case I paid myself second, but close enough!

Naturally, I have been continuing to research companies for investing. Robinhood allows the creation of custom lists. I have a list of thirty-nine stocks that I follow. I compiled the list based on three criteria: less than $20 per share, some connection to cutting edge research, and hopefully a record of dividend payments. I purchased two new companies, FuelCell Engery (FCEL) and EndLink Midstream (ENLC). I also picked up 100 shares of Western Prime Group (WPG). At $0.72 a share it was at the second lowest price I have ever paid. Naturally, no one is paying dividends this quarter and probably not next quarter either. Not that it matters. Despite this unexpected opportunity to expand my portfolio, I am still in a defensive position and still planning on doing little or no trading for the next few months.

While not as diverse as it could be, my current portfolio is much more diverse than any of my earlier iterations: 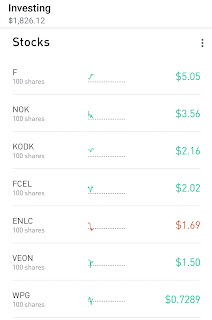 Moving forward by pulling back


As always, I am not recommending anyone purchase any particular stock. However, interest rates at banks are far below the rate of inflation. Keeping large amounts of money in your local bank causes the value to decline dramatically, even though the numbers grow ever so slowly. Therefore, I am recommending downloading Robinhood and investing in your favorite company, or perhaps companies. As a small incentive, if you use my link to download Robinhood, open an account, and deposit some money, you and I will both receive one free share of stock worth about $4. Here's my link:

Despite the vast majority of the country being trapped at home due to "shelter-in-place" orders by state governors (or perhaps because of it!) volatility rocks the stock market on a daily basis. In the most recent news, a major retailer that millions of consumers depend on for products and millions of investors depend on for dividends, declared bankruptcy and sought legal protection from its bond holders (J. Crew files for Chapter 11).

Every day some new calamity or success rocks the market and my meager portfolio jumps or crashes right along with everything else. Last week, mostly through a series of trades on Wednesday and Thursday, I moved my portfolio into what I consider a "defensive" position. In my definition, "defensive" means focusing on companies I know well with proven track records of surviving multiple economic problems, companies that routinely offer innovative product lines that I am happy to buy or recommend, and companies that regularly publish a clear vision for their future. (Ford Motor Company, for example, is my ultimate safe haven.) A "defensive" position is a place I don't mind sitting on for months regardless of market turmoil while still remaining liquid enough that if I must, I can sell everything off and transfer the money into my checking account. The last time I was in a defensive position was March through November of 2019. This was my current portfolio at market close on Friday:

I will probably keep my portfolio in this condition until the crisis passes. I rode this volatility wave to the best of my ability, but now I am out of tools. Things are changing too rapidly for me to follow and there is no way I can do more with my limited knowledge and experience. It was a good run and I am content with my success. I have about $280 in cash available for either investing or withdrawal if some amazing deal suddenly appears or if I need a quick infusion of grocery money. I don't know what will happen as the summer unfolds, but I would much rather have my meager savings sitting in my Robinhood account than sitting in a bank savings account. Several friends have been suggesting different stocks to me, but for now, I think I am content to ride out the next few weeks in a defensive position and see what happens.